Every year, the top smartphone companies come out with a better smartphone with new bells and whistles. This can make you wonder whether it is time to upgrade to the latest smartphone. The Huawei P20 Pro is one of the latest smartphones on the market and has everything that you could possibly want in a smartphone. However, you may be wondering if it is worth the $975 price tag. We can answer this with a resounding YES! Let’s take a look at the features of this amazing smartphone.

A Review of the Huawei P20 Pro

You have probably heard a lot about this smartphone recently. There have been television commercials, billboards, Amazon advertisements on their homepage and YouTube ads about this fantastic phone.

For those in America, it should be noted that this Android smartphone will not be coming to the United States. Huawei phones have captured my attention lately; however, this one has totally caught my attention and gotten me excited. This new generation offers some features including triple cameras on the back, an excellent gradient color, a 4000mAh battery and has an astounding score of 109 on DxO Mark.

Aesthetically, this phone is great; however, it does have a few design flaws. Although it is not perfect, it is one of the most unique looking smartphones on the market. I appreciate the uniqueness of this smartphone. Huawei has worked hard to bring its brand followers and customers something new. The company took a risk and created a true masterpiece with the Huawei P20 Pro.

It is definitely one of the coolest Android smartphones available on the market. The name of this gradient is called Twilight, and you will love it more than any other phone you have ever head.

One caveat to this smartphone is that there is a lot of writing on the backside of the phone. It would be better if the text on the phone weren’t there; however, it is.

Luckily, the colorful and unique glossiness of the phone overcomes the text on the back of the phone. Additionally, the backside is fingerprint and dust resistant, at least that what it seems to be but its definitely not 100% fingerprint resistant.

The power button and the volume controls are located on the same side. The body of the smartphone is exactly what you would expect from a high-end smartphone. The Huawei P20 is IP 607 water resistant and features curved edges with metal rails. The phone is solid and has a nice weight. The phone also features an IR blaster as well as storage features; however, it does not have a headphone jack, instead, it uses Bluetooth technology.

The smartphone features a camera; however, it sticks out from the phone, causing it not to sit level on a table. Although this is annoying, it is not a dealbreaker because of all of the wonderful features that the Huawei P20 Pro offers.

The Huawei P20 Pro has all of the features that you would expect from a leading design of smartphones in 2018. Although you may want to completely get rid of the bezels, the technology is not there. However, the smartphone features a great front facing camera so you can pose for all those selfies.

The front also has a fingerprint scanner and your front speaker at the bottom of the display ( see the attached picture below ). The front screen does not have any other buttons, so the phone looks sleek. 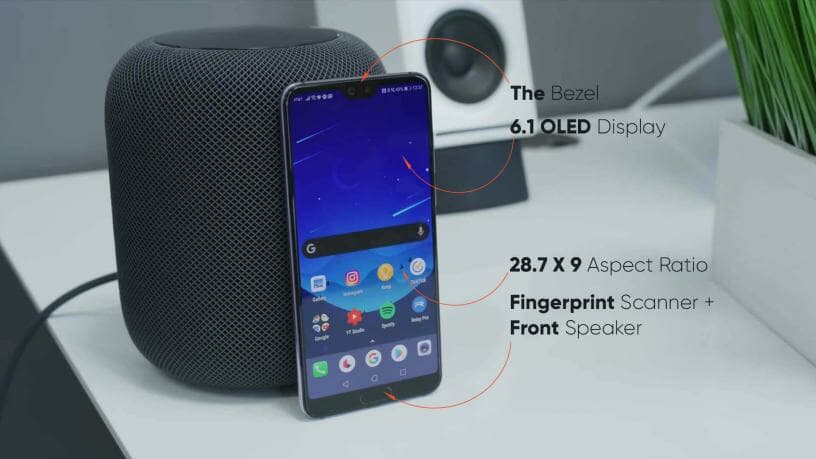 The phone features a 28.7×9 aspect ratio with 2240×1080 panels. This means that the screen size is taller than most smartphones. The OLED panel is great. It is bright enough to easily see your screen when you are using your phone outdoors. Although the screen is not as great as a Samsung phone, it does line up with what you would expect from a flagship smartphone. The screen is bright and vibrant; however, not as bright as the top of the line Android phones.

The phone features a thin battery with a 4000 million power battery. You can expect to get approximately 5+ hours of screen time on each charge. The battery will keep you using your smartphone as much as you like it. The battery is a little thicker than those razor-thin smartphones; however, who really wants so thin of a phone that it doesn’t fit well in your hand or is easy to drop? The extra few millimeters of this battery provides you with an extended battery life and a thin phone.

The Huawei P20 Pro features an amazing 40 megapixel main camera. This is one of the main reasons that I wanted to review this smartphone. Unlike other smartphones, this one has not two but three great cameras on the back, making it the only phone for smartphone users who love taking photos.

This phone scored an incredible 109 on DxO Mark, which is one of the reasons that I had to get one of these smartphones and try it out for myself.

With no further ado, let’s take a look at the main feature of this smartphone – the camera.

The Huawei P20 Pro features three cameras on the back of the phone. The main camera offers 40 megapixels that include optical stabilization and an F2.0 compliant aperture. The secondary camera features a 20-megapixel monochrome sensor featuring an F1.6 aperture and optical image stabilization. Finally, the third camera has a 3x telephoto lens with an F2.4 aperture, 8 megapixels and image stabilization.

The lens for the 40-megapixel camera is enormous. When it is measured diagonally, it measures an astounding 1.7 inches, which is approximate twice the diagonal measurement of the Google Pixel 2 and the Galaxy S9. When you compare the Huawei P20 Pro primary camera lens to the iPhone 10, it is about a half of an inch larger diagonally.

There are several advantages of a larger camera lens. The camera with a larger lens allows you to photograph better in lowlight environments. The field of view is more extensive thus you get a better quality picture, and the overall performance of the camera is much better.

For these reasons, I especially enjoy having a larger lens on this smartphone.

How Does the Camera Perform?

The lens of the camera is much larger than its competitors and provides you with high accuracy, allowing for accurate color representation, clearer images, and a high dynamic range. This creates photos that are similar to high-end DSL cameras. The only problem that I have noticed is that the sharpening feature of the camera is really aggressive.

Here are some things that you should consider about the camera. It does feature a built-in auto made that makes picture taking so easy.

Point 1 – The main lens uses a quad structure. What does this mean?

Although it has a 40-megapixel sensor, its output uses 2×2 blocks of pictures. This means that the output image is 10 megapixels rather than 40 megapixels. However, don’t let this keep you from checking out this smartphone. It offers super detailed and sharp images.

Point 2 – The video camera is not great. Some may say that it is totally worthless; however, I disagree to a certain point. It has the ability to shoot 1080 P with decent details and colors, but the video/image processing chip that is used cannot keep up with the stabilization used in 4k resolution videos. The 4k video actually looks terrible on this smartphone.

Point 3 – The photography experience of the Huawei P20 Pro smartphone is speedy. IT offers laser autofocus and is superb compared to other Android phones. The time it takes to open the camera application and shoot your photo is very fast, which means you won’t lose those desired shots. All you need to do is press the volume button twice to capture any snapshot your camera is pointing at.

The camera allows you to take shots within 0.3 seconds. Although this does not allow you to know exactly what you are taking a photo of, it does showcase the speed of the camera. Once you open the app, you can utilize the telephoto zoom button that allows you to zoom in 3x or 5x with a simple touch.

Many people wonder about the AI of the Huawei P20. The AI is quite straightforward and easy to use.

There is a trigger that allows you to turn on the AI. While the AI is on, you must wait for a second while the image is in the viewfinder. This allows the AI to everything in the photo shot. Then, the AI automatically enhances the items in the shot that the AI assumes you want to capture. This feature is astonishingly correct in identifying the items that should be captured in a photograph.

If you are taking a photo of greenery, the AI will turn on the greenery mode sensor to create a pop of color like what you see with your naked eyes. If you are trying to photograph a bouquet, the AI will switch the camera mode to the flower mode to capture the breathtaking colors in an arrangement.

The AI is fast. As soon as you turn it on and point your camera, it almost instantly knows everything within the frame and tries to understand what you are trying to capture. Then it applies one of the different pre-determined color channels, which enhances the overall color quality of your photograph.

For example, if you are taking a picture of greenery, it will turn on the greenery mode. When this mode is turned on the green channel is increased, to enhance the greens in your photos, which is so cool.

The blue sky mode will enhance the blues in your photos. If you are trying to photograph a blue skyline, the sky will appear bluer than what is first viewed through the camera lens.

Sometimes it is enjoyable to use filters; however, most of the time I hate using filters for my photos. Most of the time I prefer to take a regular photograph, just like what my eyes see. The automatic enhancement great; however, it is not one of my favorite things when it comes to taking pictures.

If you want to take pictures using a smartphone that does not need any type of editing, this camera will provide you with the photos that you want.