Are you worried that your PC might have been infected with the VulkanRT program? If you have searched the term VulkanRT virus, you’re definitely not the only person looking for answers.

As most Microsoft Windows users put it, VulkanRT is installed on their computers without their consent or permission. As such, many users have had their doubts about the software. Many people think that it is a form of spyware or malicious program that can cause problems to their computers.

Many users are actually panicking because the mention of that specific name has been flooding some computer forums recently, but what’s the real truth about this program? Is VulkanRT really a threat, or it’s just a bunch of misinformed, scared users talking about it? Should you be worried at all? If you want to address all of your concerns, we really suggest you read everything carefully to overview this program.

Vulkan Runtime Libraries is a cross-platform API whose primary purpose is to improve the performance of 3D applications (think games and interactive media) running on Windows. It is also available for the Linux operating system. It was developed back in 2014 and was officially announced in 2015 as Game Developer’s Conference.

It also helps to balance your CPU and GPU computation usage. It’s actually installed as part of the graphics driver or when you update your GPU driver on your system. Note that the installation is facilitated by CPU/GPU manufacturers such as Intel, Nvidia, AMD, etc.

The API is designed by the Khronos Group, which is an American non-profit consortium. They have also built various other open standard APIs, including OpenXR, OpenGL, and WebGL, among the few. 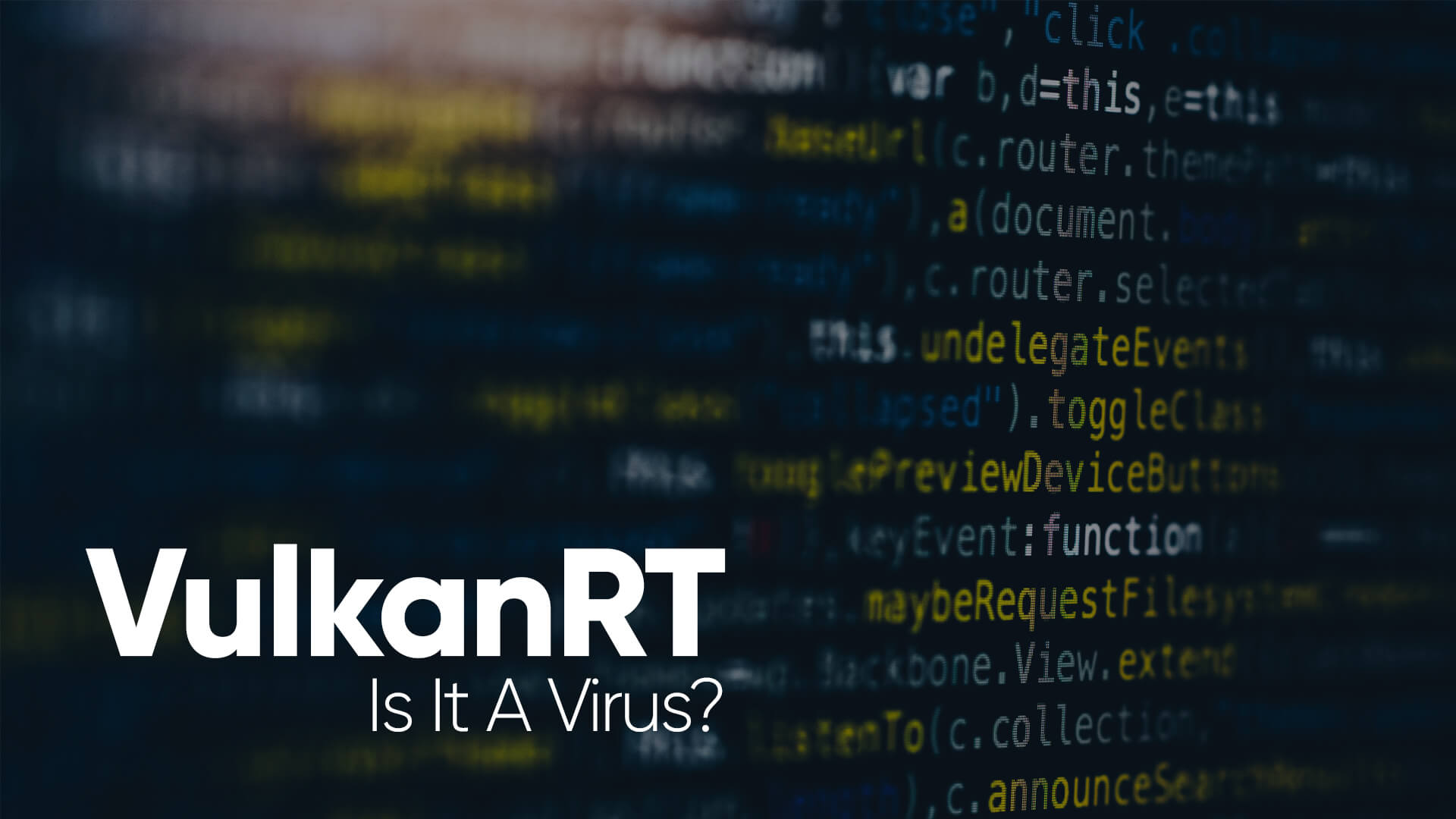 If you are concerned that VulkanRT is a form of malicious file, virus, or worrisome program, don’t worry about it; it’s not at all the case. In fact, as you will find out in this post, it is a legitimate and somewhat helpful program that you should not uninstall from your computer.

For those in gaming and technology, you may remember that AMD announced an API that promised to improve many games’ performance. It has been shown that the API has a significant effect on games such as DOOM and Wolfenstein. Yes, you guessed it right. This 3D graphics API was Vulkan; to some extent, it enhanced the games’ performance and graphics. The API is now supported and used on all graphics cards available on the market.

But many users still don’t have much knowledge about it, so I decided to discuss its features in this post. Below, you will learn everything you need to know in detail to know exactly what you are dealing with.

What Is VulkanRT Used For?

Vulkan Runtime Libraries, like DirectX and OpenGL, is a graphical API (Application Programming Interface) that enhances the graphical capabilities of your system. It allows games to make use of more advanced graphical features such as virtual reality, ray tracing, and even HDR display.

It is an application developed by the Khronos Group, which is a non-profit organization that promotes the use of open standards on various platforms and devices.

The VulkanRT APIs were initially developed by the Khronos Group to replace the OpenGL graphics rendering engine. Of course, OpenGL has been around since the 1990s, and it has proved to be indispensable in the world of graphics development.

However, there are some areas where OpenGL lacks in performance, especially on modern PCs with multiple cores. For example, OpenGL and Direct3D 11 have fixed-function shaders and state machines. You can’t change them without changing the whole pipeline – which means you need to recreate it from scratch with a new shader if you want to make any changes. This is where VulkanRT comes into play. The Vulkan RunTime APIs are much more capable of utilizing all the available cores on a CPU to render graphics at higher framerates than OpenGL, which was designed for single-core CPUs.

In general, VulkanRT main purpose is to reduce the overhead in terms of performance and give the user more control over the GPU. It also reduces CPU usage on PCs during heavy performance-intensive tasks, ensuring that the performance cores don’t max out and result in a shutdown.

One of the main benefits of this runtime library is that besides reducing CPU usage by the applications that need it, it also ensures the entire workload is distributed evenly in multi-core CPUs. This way, a single-core won’t be doing all the work; all the core will do the work equally.

What’s more interesting is the fact that VulkanRT works a lot like DirectX 12. Nonetheless, the main difference here is that DirectX 12 can only be used on Windows 10 PCs. At the same time, the Vulkan Runtime can run on a number of operating systems, including Windows, Linux, Mac Os, iOS, and Android.

While VulkanRT is widely considered the successor to OpenGL, it’s not a complete replacement for OpenGL. Why? Well, there are some multiple use case scenarios that the less complicated nature of OpenGL is better suited for.

Purpose and Use of VulkanRT:

According to official documentation, VulkanRT is comparable to Mantle and Direct3D. VulkanRT is a graphics API built on the cross-vendor Khronos Group version 1.0 specification of Vulkan. VulkanRT simplifies rendering graphics in a much more efficient manner, and lets multi-threading take place on both CPUs and GPUs for increased performance. VulkanRT is only used in graphics processors as it comes with a graphics driver along with DirectX support.

Now that you have an idea of what this runtime library is, you might be curious to know why it might be necessary for you to have it on your computer.

Applications that are optimized for Vulkan run much faster and better by utilizing its API. For example, Doom runs really great when shifted to this runtime, and in comparison to using DirectX, especially for those on an AMD graphics card. In fact, with AMD GPUs, shifting to VulkanRT will give you better graphics performance than using DirectX API.

Although this can also be achieved using the DirectX12 API, this is limited to PCs with Windows 10. VulkanRT, on the other hand, is supported and available on almost every OS in the market and will make things a lot easier.

The way it distributes the workload instead of having one core do the heavy work makes the CPU more efficient at performing its tasks.

The Vulkan runtime provides unified management of computing kernels along with graphics shaders. This helps to eliminate the need for having a separate compute API and another API for graphics.

Here Are A Few Reasons to Remove VulkanRT From Your Computer.

This API is a bit more complex regarding its cross-platform graphics 3D graphics management when compared to OpenGL.

This API is not universally supported, which means that not all application developers don’t support it, and so you might not see any improvement in the graphics performance.

How Did VulkanRT Get on My Computer?

This can be a very difficult question to answer. As we have already mentioned, VulkanRT API is neither a virus nor a malicious application. It’s not used by cyber-criminals to infiltrate your PCs or steal your data. It is only used by Vulkan API’s graphics drivers. That being said, graphics drivers commonly come bundled with third-party applications. A good example is GPU drivers by AMD. They come bundled with a few of their commercial applications, such as Raptr, etc.

It simply means that the VulkanRT for AMD GPUs can be automatically installed without your consent, just by having the AMD graphics card drivers installed on your computer. Cybercriminals leverage this vulnerability to spread viruses through legitimate applications. As a result, it doesn’t take long to realize that you have malicious programs on your computer.

Therefore, it is important to download your drivers from official channels and pay attention to any utilities associated with them. If you don’t, you may end up with malware on your computer.

Should I Uninstall Vulkan Runtime Libraries??

If you need a one-word answer, then it, No.

You might be wondering what would happen if you uninstall it. Well, you won’t notice the uninstallation with the daily use of your PC. However, when you decide to play a game or run a video editing software, you might notice a difference.

Some games, like Talos Principle, Dota 2, along with Unity, CryEngine, and Steam games, require VulkanRT to run efficiently. So. If you intend to play any of these games, there’s no point in uninstalling the application.

If you already did uninstall the program and need to install it again, you can re-install it by reinstalling your graphics drivers and updating them to their latest versions. This should install the Vulkan runtime library back to your PC again.

Where to Find Vulkan Runtime Libraries On Your PC

You might be interested in checking or confirming whether the application is already installed on your computer or not. The easiest way is to navigate to your system’s program files x86 folder and search for VulkanRT. You can do this in two ways:

Vulkan Runtime Libraries is free software, and it is distributed through its official website. However, it is also available on a wide range of third-party file sharing sites and application marketplaces. Most of these sites have simply uploaded a third-party installer, so users have no idea about what they are downloading, what changes, and whether they have the right to use it. When you download and install the Vulkan Runtime Libraries from these sources, you may encounter a screen that prompts you to choose a package to install. The difference is that the official installer won’t offer you an optional package to download; instead, it will offer the “accept EULA” and “next” buttons for you to press. In contrast, the unofficial installer will show you a list of optional items to install along with the basic VulkanRT package.

Does My System Support Vulkan?

If your system runs on Linux, Windows 10, Windows 8.1, Windows 7, Windows Vista, Windows XP, Xbox One, and/or PS4, it supports Vulkan. If you have updated your system with the latest GPU drivers, then the VulkanRT (Vulkan runtime libraries) API should be enabled on your PC.

You don’t need to worry about the VulkanRT runtime libraries if it is running on your computer. While it is not the best runtime library out there, you’ll find that it does help with the PC performance when running heavy graphics applications or games in general.

Nonetheless, some users still think that the Vulkan Runtime is a form of spyware. And sometimes it’s even mistaken for malware, but in reality, it’s really not. Besides, whenever you update your graphics card, make sure you follow the given instructions carefully to avoid installation problems.

I hope this guide was helpful to you. If you have any questions or suggestions related to this topic, please share them with us in the comment section.