Technology, with its unrivaled potential to transform the world, has been quite a blessing for mankind. Some changes and inventions have been small, while others have been massively impactful on how we live our lives today. One such invention is the computer—the machine that has taken the world by storm and completely changed how we interact with information.

Computers, however, would not have been possible without another ground-breaking invention—the microprocessor. This tiny chip is responsible for executing instructions given to the computer so it can carry out specific operations. And Intel Rapid Storage Technology helps your processor work even better by enabling it to communicate more effectively with storage drives connected to your system, especially SATA disk drives that have the potential to slow down the rest of your system.

With a host of available optimizations, Intel® RST maximizes storage performance by using built-in acceleration for reading data from your hard drive so it can work more efficiently with other parts of the processor and memory. But there’s so much more to it than that, and to help you understand the full range of IRST capabilities, how it works, and what you can do with it—and why that’s so important for your computer—we’ve put together this guide. 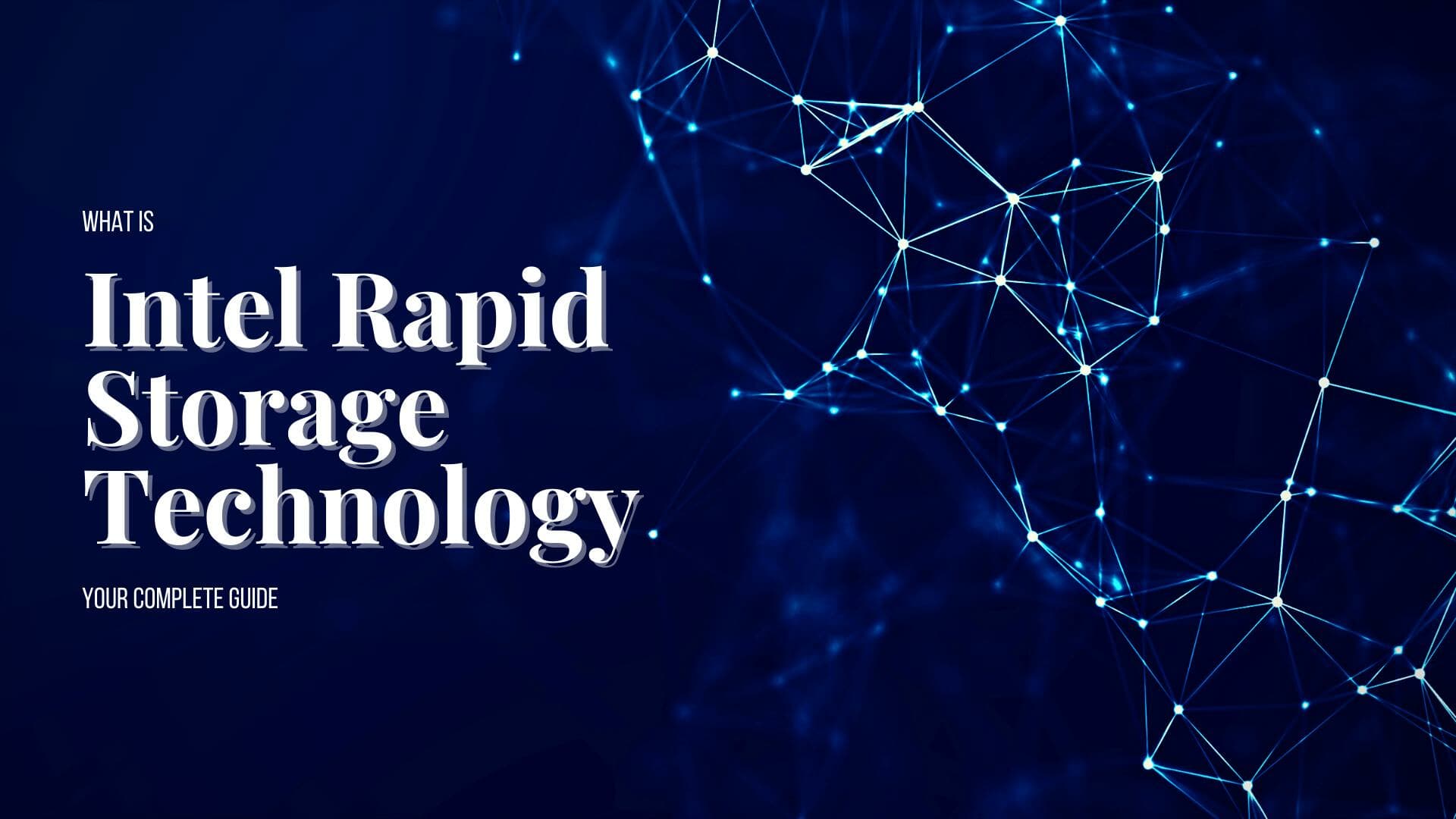 What Is Intel Rapid Storage Technology?

Your computer is a complicated device. It’s made up of many different parts, each of which works together to help you accomplish the tasks you want to perform. The CPU or “brain” of your computer is responsible for processing instructions and performing calculations, but it can’t do this all by itself. It requires both volatile and non-volatile memory to store instructions and data and a variety of other hardware components to provide input/output (I/O) capabilities, storage capacity, network connectivity, and more.

However, not all of these components are created equal. Some are faster, some are slower, and some offer different features than others. All these disparities can significantly impact the overall performance of your device. Understanding this, Intel released Intel Rapid Storage Technology, which is designed to improve the storage performance of your device by using a more efficient, faster storage controller.

Intel Rapid Storage Technology is a suite of software modules that performs command and control of Intel SATA, PCI Express, and USB storage devices. It provides RAID functionality, as well as the ability to detect, log, and correct errors on RAID arrays if they should occur. The software also includes an option called “Intel Smart Response Technology” that works with the Intel Z68 chipsets.

The Intel® RST software is included on most motherboards with Intel processors, but it must be loaded into system memory before use. This can be done automatically during the Windows setup process or manually by going into the BIOS/UEFI settings menu and loading the RST module from there.

All three versions use the same GUI interface and are capable of automatically creating a small partition (which is not visible in Windows Explorer) on your hard drive that holds the hibernation information. The size of this partition varies with how much memory you have installed. For example, if you have up to 6GB of RAM, Intel® RST will create a 1GB hibernation file; for more than 6GB, it will create a 2GB file. Windows 8 can also compress this file when it saves it so that the actual storage requirements are considerably less than 2GB.

The hibernation partition also allows you to use RST to create a separate system image that can be stored on your hard drive or other external storage media. The benefit of storing the system image in that small partition is that it is not visible in Windows Explorer, which means it cannot be easily deleted by accident or by an errant virus. System images are also smaller than regular files because they are saved as raw data.

Beyond the creation of the hidden partition, the other significant change RST makes is the addition of its own boot loader, which appears after you power on your computer. The new menu gives you the option to launch Windows normally or to enter into a special mode where you can restore your system image from an external drive.

In essence, the whole purpose of Intel Rapid Storage Technology is to manage the storage on your computer more efficiently. Best of all, RST can integrate directly with your system’s hardware to deliver increased responsiveness by optimizing CPU usage for background processes that typically slow down PCs. You can also use RST to create high-performance storage pools that link multiple hard drives together—and instantly boost your PC’s speed.

Why Use Intel RST

If you’re running Windows on a desktop computer, one of your biggest tasks is probably managing all of that data that accumulates every day. After all, if you’re not on a Mac or Chromebook, chances are your machine comes with multiple drives. You may also use some sort of network-attached storage (NAS) to store and access even more data.

All of these devices can take up a lot of drive space, and it can be time-consuming to move files from one place to another—or even just copy them from point A to point B within a single hard drive. Plus, these transfers tend to slow down when you have other processes running in the background.

Intel RST was created specifically for situations like these. The software essentially allows you to create virtual disks out of your system’s unused SSDs, allowing faster file transfers when multitasking is at its peak.

The first thing you need to do is download and install Intel RST on your computer. You can download it here. You’ll be asked to choose your operating system (Windows 10, Windows 8, or Windows 7) before installing it on your computer. Make sure you select your OS before downloading it; don’t forget to select 64-bit if needed.

The download will be a .zip file. When you open it, make sure to read all of the instructions included in it carefully, as well as any additional information provided by Intel during installation. If at any point you aren’t clear about what something means or how something should be done, consult their FAQ for further clarification and guidance.

Should I Use RAID or Intel RST?

RAID stands for redundant array of independent disks, a system in which multiple hard drives work together to increase performance and data protection. Although some RAID setups involve more than two disks, they’re typically referred to as RAID arrays. The term is sometimes confused with a redundant array of inexpensive disks (or RAID 0) but refers instead to a redundant array of independent disks. In either case, when multiple physical hard drives are connected in a logical configuration – whether it’s through hardware or software – it’s called a storage area network (SAN).

[Note: There is no such thing as an m-array. It’s not an official RAID acronym and has been rejected by major storage hardware and software companies.]

When you add another disk, your data will likely be safer because you’ll have three copies on separate physical devices. If one of those disks fails, you can replace it without losing any information on its twin copy on another disk. One drawback to consider is that while adding disks increases capacity and redundancy, each new drive also diminishes overall read/write speeds.

Where To Find Support For Intel RST

As mentioned earlier, when you purchase a PC with Intel storage technology, there are quite a few resources you can utilize to get help when you run into trouble. For instance, Intel has an online forum where customers can learn about issues that other people have experienced with RST and then post their own questions.

When posting, you’ll want to use your model number so other users can tell what version of RST you’re running. If it’s an older version than what they’re running on their system, they might be able to offer help based on their experience or provide links to updated drivers that will work better for your needs.

The Intel Rapid Storage Technology (IRST) is a program that was developed for Windows 7 OS and later, allowing computer users to configure their hard drives quickly and easily. For example, IRST can copy data to an SSD without user intervention; it also comes with an easy-to-use monitoring program that can tell you if your drive is near capacity or if it needs defragmentation. There are several other features built into IRST, but for now, we’ll look at how it works in greater detail.

First of all, understand that IRST has two pieces: software and hardware—the software is automatically downloaded when your computer connects to your internet connection; then, it automatically loads on boot-up.

Do I need Intel Rapid Storage Technology with SSD?

Most systems are also equipped with solid-state drives (SSDs), which typically don’t need to be configured in order to work at peak efficiency. But, there are circumstances when you should consider updating or changing your storage configuration if your system is equipped with both SSDs and traditional hard drives.

Is it OK to uninstall Intel Rapid Storage Technology?

Many have asked whether it’s possible to uninstall Intel Rapid Storage Technology if they aren’t going to use it or their computer doesn’t have a solid-state drive. The answer is a resounding yes. In fact, Intel itself encourages users to remove its software if it will not be used.

How Do I Know if I Have Intel Rapid Storage Technology?

If you don’t know whether or not you have Intel Rapid Storage Technology, then follow these steps to find out. First, go into your computer’s BIOS by restarting your computer and pressing Del while it starts up. Once in your BIOS settings, scroll down to see if there is an option for EZ Setup Support. If there is no EZ Setup Support available, then you do not have Intel Rapid Storage Technology.